*Note appended below When 19th century Texas land baron Samuel Maverick flouted tradition by refusing to brand his cattle, he could not have known his name would come to represent everything from brassy independence to Tom Cruise to Alaskan politicking. But his indifference toward the status quo soon gave unbranded cattle the ranching land over […] 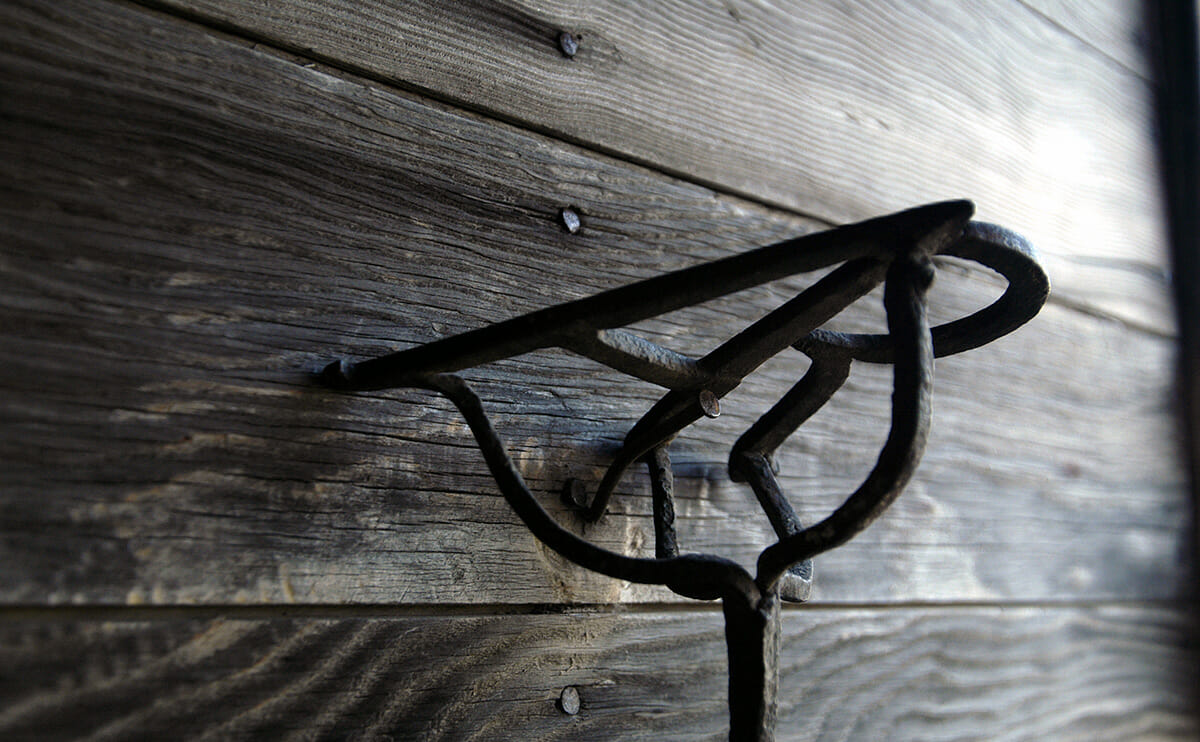 When 19th century Texas land baron Samuel Maverick flouted tradition by refusing to brand his cattle, he could not have known his name would come to represent everything from brassy independence to Tom Cruise to Alaskan politicking. But his indifference toward the status quo soon gave unbranded cattle the ranching land over the nickname “mavericks,” and wranglers have been happily roping lawless bovines ever since.

Most things have changed in the last 200 years, but cattle branding isn’t one of them. The practice dates back to the beginning of livestock tending, and Ancient Egyptian brands like this lion-headed bronze iron burned hieroglyphics into cowhide in just the same way as ranchers do today (although with significantly more deference to the gods). The Spanish brought cattle ranching to Mexico, where a central brand registry was established in Mexico City as early as 1537. Cattle branding followed the Spanish into Texas and it grew alongside open range grazing in the mid-1800s to become the de facto means of identifying a cow from Bismark to Baja.

If done right, branding creates an indelible mark that allows ranchers to keep track of their stock, wayward cattle to be returned to their owners, and stolen cattle to be readily identified, an especially important trick in a time when theft or “cattle rustling” was a crime often met with death. Law-abiding ranch hands kept hand-written and carefully illustrated “brand books” on hand to identify and sort their cattle, and brands today are required to be registered with state or county agencies where a “brand inspector” keeps confusion in check.

What on the surface seems a straightforward practice of laconic, no-nonsense plainsmen, cattle branding is in fact a playground of design and cowboy semiotics. Symbols, visual puns and jaunty combinations of letters, numbers and styles make up a tradition of brand design that’s held steady through decades, giving rise to such notorious brands as the “XIT”, the “Running W” and the “7 Up”.

What’s in a brand? First and foremost, the language of cattle brands is constrained by the not insignificant fact that a brand’s design will be burned into the hide of a living animal. Complex and flowery designs are impractical, easy to flub and, most importantly, more painful for the animal being branded. “The simpler the better,” emphasizes Ken Miller of Long View Ranch in Mandan, North Dakota. “A lot of people want to build a complicated brand like something inside of something else, like a diamond or circle or heart. They work, but they’re harder on the animal.”

Miller brands over 200 of his own cattle yearly, but he channels his creative side by running a brand design business where he consults for outside clients. Their most frequent mistake? “People get carried away and they do stupid things.” Miller says he’s seen overblown designs like a cattle skull with three letters, plus eyes, ears and horns. “Just because you want it doesn’t mean it’s a good thing to put on an animal.”

Branding designs may have their limitations, but creativity and unique visual conventions thrive within the constraints. The letters, numbers and symbols in brand designs create countless distinct permutations, especially with various styles that can render a single letter into several distinct designs.

Take, for example, the letter “A”. Mark it at an angle and it’s a “leaning” or “tumbling A”. Topple it on its side and it becomes a “lazy A”. Turn it upside down and it’s a “crazy A”. Give it wings, feet or a semicircular rocker and make it “flying”, “walking” or “rocking”. Rendering the letter in curvy script makes it “running.” And that’s before adding numbers and symbols to make a brand even more distinct. 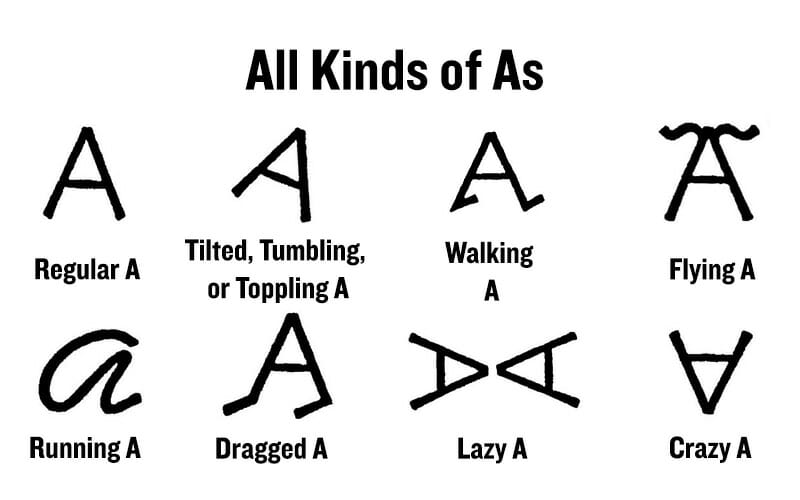 The vocabulary of cattle brands includes everyday objects that jocular cowboys adopted for their signature. Keys, hats, snakes, rocking chairs, guns, fish, panhandles, arrows, pitchforks and boots add flair to the common bars, circles, diamonds and crosses. Brands are read left to right, top to bottom and outside in, depending on the design, and the vernacular allows for puns and jokes within the design (take, for example, the Bar BQ, Open A Bar or 2 Lazy 2 P brands).

In the rough days of ranching, brands represented a singular opportunity for sentimentality. A brand became a symbol of pride for a family or ranch and passed down through generations of cattle owners. “They’re very proud of their brand,” says Miller. “That’s their logo. It’s personal. They want to stamp it on everything.”

But while cattle owners deployed their brands, cattle rustlers on the make were just as ingenious in coming up with ways to alter or falsify existing brands. Rustlers made use of “running irons” with hooked tips to forge or change brands, branding freehand under cover of night. Being caught by an angry cattleman with a running iron in your possession meant instant death for many rustlers, but the temptation was hard to resist. Adding a few lines or curves to a brand could quickly turn someone else’s cattle into your own, and inspired rustlers were skilled in the sleight of hand that could transform a “Bar S” into a “48” or a “Flying U” into a “7 Up”. 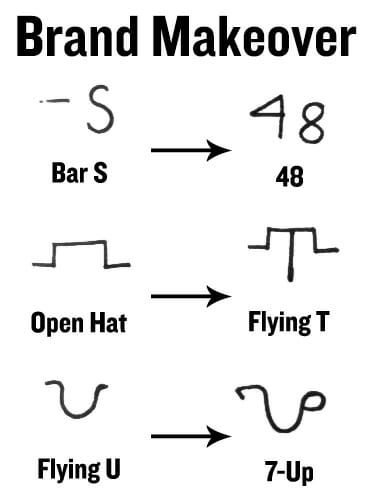 Although the practice of branding has waned somewhat since the decline of open-range grazing, a recent resurgence in old-school cattle rustling has ranchers revisiting their hot irons (or, as the case may be, freeze irons, a newer and less extreme technique that freezes instead of burns). Livestock prices are up and the struggling economy has spurred increased thefts of cattle, which can garner over $1,000 a head.

As a result, cattle owners who may never have branded before are designing new brands or reregistering old brands that have fallen out of use. Local law enforcement is encouraging the uptick in branding awareness.

“We have yet to find a system that can replace a hot brand on a cow,” Carl Bennett, director of the Louisiana Livestock Brand Commission, recently told USA Today. “There’s nothing in modern society that’s more sure.”

A commenter has brought up that similarities exist between this post and a post by Smithsonian Magazine writer Jimmy Stamp, posted on April 30, 2013. Having examined both posts, the troubling similarities between the posts seem to be:

1. The final quote, both of which are taken from this USA Today article.

2. The use of imagery, mainly from the Texas Cattle Brand Registry, to illustrate the various types of letters and codes used in cattle branding.

3. Various points within the piece, while sourced to different outlets, are mirrored within each piece (the use of Egyptian cattle brands, the origin of the phrase “maverick”).

We have talked to the writer, who says that she read the Smithsonian post, but the similarities were unintentional. However, not acknowledging the Smithsonian story within the piece is a major error in judgment on her part, and on ours as editors. We apologize to the Smithsonian Magazine, Jimmy Stamp, and our readers.

Can I post a picture of my grandfathers branding iron to help me find out what part of it means? It’s M3 I know it’s a M for motley but there’s no reason for the 3. It may be a heart. What does the heart stand for

What would a brand ‘split fork’ look like? Thanks!