The Art of Bees

For the better part of the last decade, an artist has been wowing crowds and critics with his bee-spoke sculptures. 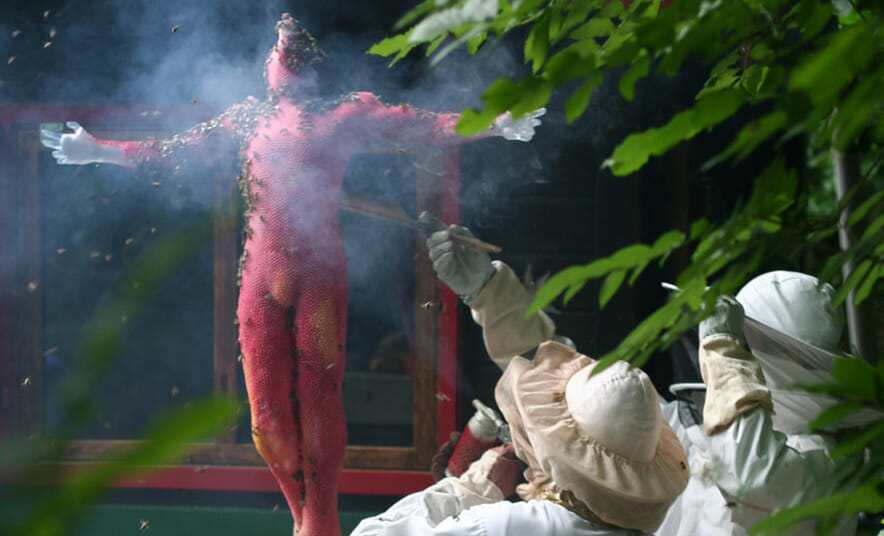 When TomÁ¡s LibertÁ­ny secured a prestigious job doing an installation for the London Olympics in 2012, there were, understandably, some security concerns. He was working with a live element that could easily harm the public and he would be employing thousands of small flying objects (some called “drones”) to help realize his piece. Twenty-four hour security was required and “so much paperwork,” he says.

The bees had secreted honey dyed red, lending an almost-bloody feel to the site of them feasting on the human form.

For the better part of the last decade, LibertÁ­ny has been exploring the creative possibilities of objects made out of beeswax by bees. In two rather famous instances, the bees themselves were part of the experience. For Art Basel in Miami in 2009, he created a mold of a man in a cruxification pose (titled “The Unbearable Lightness”), and put the bees in a sealed container inside a gallery. Like in every LibertÁ­ny piece, the beeswax objects themselves were full of honey, having been made by the bees off-site, so what onlookers were watching was not the construction of the form, but the bees drinking themselves silly on honey. In this case, the bees had secreted honey dyed red, lending an almost-bloody feel to the site of them feasting on the human form. Even for LibertÁ­ny’s works that don’t involve the public looking at bees, extracting the honey is always done by the bees, so nothing is lost or wasted. For London, bees in a glass case ate the honey from a large conic flower (“The Agreement”) and then the piece lived outdoors over the course of several weeks.

“It was a huge glass cabinet with a sculpture inside it, and a beehive underneath,” says the Slovakian artist, who is based in the Netherlands. “With a hole with as an escape. It was a living sculpture, if it truly worked.”

But even though these pieces invite gawking, LibertÁ­ny is not trying to shock. He had been working with beeswax for years before he got the idea to enlist the bees themselves as collaborators – and that insight has landed his pieces in collections at the Museum of Modern Art, among other places. Trained as an industrial designer (he has won a grant from Soros’ Open Society Institute Scholarship to study in Seattle), LibertÁ­ny was attracted to the “vulnerable” nature of beeswax, the way that it was absolutely unsuitable for most industrial design. He was also aware of other artists who have been influenced by bees, particularly conceptual and environmental artist Joseph Beuys. But LibertÁ­ny wanted to do something different, “take an extreme point of view” and make explicit the connection between the material and its origins.

Thus began LibertÁ­ny’s education into the world of bees. “I knew as much about bees as the next person – they make honey and they sting,” he says. “What surprised me was that whether it was a queen or a worker bee, it came from the same egg. The bees decide whether it will be a queen and place different food in the cell.” In other words, “food defines the whole concept of who you are.”

In practical terms, LibertÁ­ny spent months working with beekeepers to figure out how to construct a shape that the bees would make a honeycomb over. In the end, the materials were “fairly obvious” – steel – but “the trick is the form.”

“It’s quite dependent on how the shape looks,” he says. “It needed to be convex or concave, otherwise it would collapse.”

The larger question, though, is the ethics of making bees your unknowing artistic collaborators. LibertÁ­ny emphasized that he wasn’t forcing the bees to do anything: they would not make honey if they didn’t feel safe or happy. All of his projects are overseen by beekeepers and, in the end, the state of the piece reflects the health of its workers. He has rejected ideas, like drugging the bees to see what kind of alternative honeycombs shapes would happen, because it would injure the living creatures. “The objects are more telling of the environment it was made in, rather than the objects themselves,” he says. The fact that the objects are strong and solid speaks well of the health of the bees.

So far LibertÁ­ny and his bees have made vases, a flower, a human form. What’s next? The artist doesn’t solely work with bees, as he recently made a marble seat for Milan (that soaks up the sun during the day, making it naturally warm) but says he would love to construct a building from beeswax. In terms of the danger of working with live bees, LibertÁ­ny is dismissive – “treat them well and they won’t sting you.” But the threat of being stung is always there.

“Many times, I have a ghost,” he says. “You think you have a bee under your clothes. Whenever I work with the bees, I’m shaking off something that’s not there.”