He and his wife Martha run the Kraus Honey Company out of Fruitland, Washington, and spend part of every year shipping their bees across the western United States to pollinate almond groves and soft fruit trees. In practice, this means loading up two semi-trucks with 400 hives each. Each hive carries anywhere from 30,000 to […] 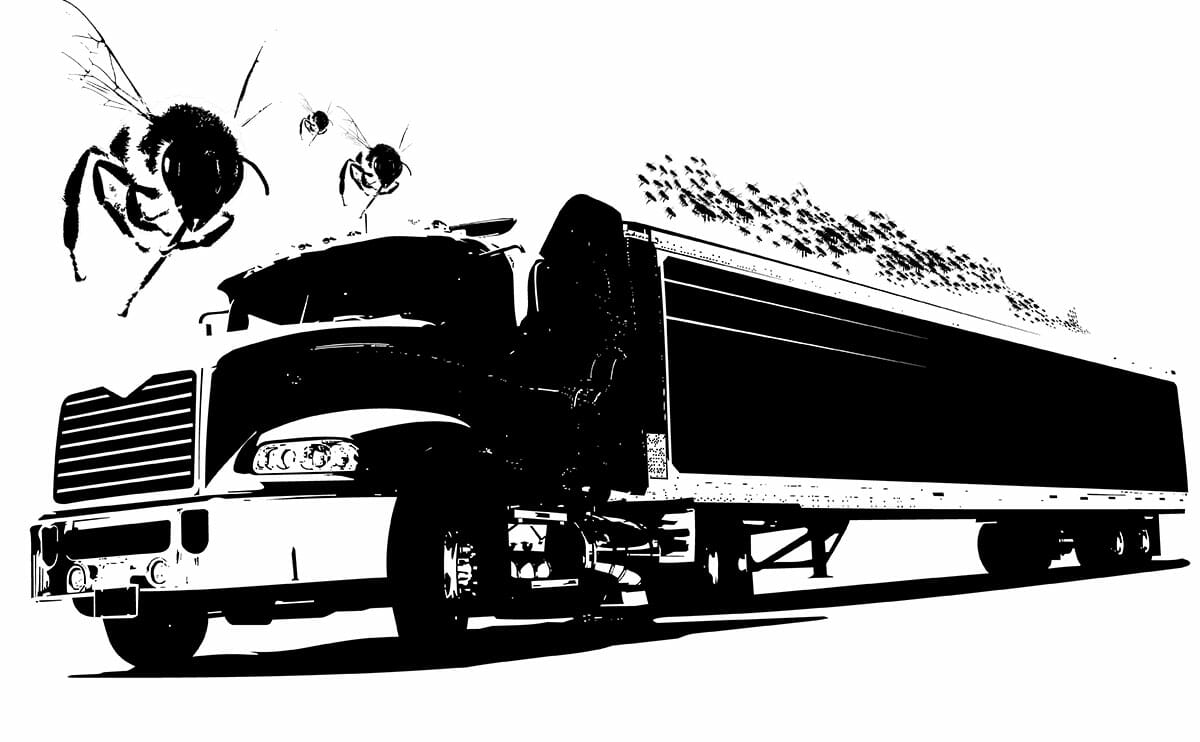 He and his wife Martha run the Kraus Honey Company out of Fruitland, Washington, and spend part of every year shipping their bees across the western United States to pollinate almond groves and soft fruit trees. In practice, this means loading up two semi-trucks with 400 hives each. Each hive carries anywhere from 30,000 to 50,000 bees, meaning if you pass this bee convoy on the highway, you’re blowing by around 32 million bees.

We talked to Kraus about his life shipping bees across state lines.

John Kraus: I started off as a hobbyist in the mid ’70s with a few hives, and gradually built up over the years. I went full-time when I had about 200 hives in 1993. I became a migratory beekeeper, where we run into California for almonds and then back up into Washington state for the soft fruit and then eastern Washington for the honey flow. That’s what we’ve been doing since ’93.

MF: How long does that keep you out on the road?

JK: It’s different at different times of year. When we ship them to California, we don’t leave home. We just hire somebody to unload them down there and put them on a ranch up towards the gate of Yosemite. Then we go down to California in January and we spend about three weeks there. We go through the hives, check them for queens, for strength, and then put them in the almond groves. And then we’re back home for five or six weeks depending on the season. It takes about a week to go down and gather them all together and ship them back north.

After almonds, we go through again and move them into the soft fruit. That’s probably the worst move because we load them ourselves, beat feet and drive all night, and then unload. Load them up on a semi at dusk, drive 300 miles, and then unload them.

MF: How many hives are you moving?

MF: What’s different about shipping bees from other types of cargo?

JK: You can’t stop in the middle of the day when it’s warm out. The bees will fly and get all confused. So you try to load them up at dusk and then get them off the truck the next morning. If you’re doing interstate travel they need to be netted, because you can’t go from Washingon to California overnight. So we’ll load them up at night and try to get the truckers drive a little ways and get some sleep, and then drive all day the next day.

MF: Do truckers ever balk at moving bees?

MF: Is the majority of your business shipping bees to people that need them, or is that a sideline?

JK: About six or seven years ago, there was a shortage of bees. The almond growers kept planting more almonds, and there weren’t enough bees, so the price spiked. At that point, all beekeepers in the western United States started bringing in half — sometimes more than half — of their income just from almond pollination. We get $150 a hive down there for rental versus about $50 up here. It’s a huge difference.

MF: Was that tied into colony collapse?

MF: Do you think colony collapse is being used as a catch-all term?

JK: Yes. They haven’t determined there’s any one particular stressor. It’s a multitude of stressors. There’s neonicotinoids pesticides that are expressed in the pollen and nectar of plants and hang around for years. And there’s viruses that weren’t really a problem before the mites came along and weakened the bees, plus transmitted the virus. The mites actually puncture the exoskeleton and suck the juices out of the bee and then move onto the another bee and transmit the virus. Just like if you use a dirty needle.

MF: That is graphic.

MF: Have you ever lost a hive during shipment?

JK: Not really. I’ve heard of a semi tipping over and creating a huge mess. We haven’t really had any real problems. If you’re shipping down to California and its 90 degrees down there, it’s tougher on the bees. They’re under nets and they want to get out and fly around. You lose some, but there’s so many in there it’s a drop in the bucket most times.

how are the rented honey bees recovered after pollinating the blossoming almond trees in California?